This issue has been addressed in the literature. Ricker (1975; page 211) states that the true mean weight is always greater, “of the order of 5%,” than the mean weight computed from the weight-length relationship with the mean length. Tesch (1971) suggested that the error in predicting mean weight at age with the weight-length relationship using mean length-at-age would be about 5-10%. In a simulation study, Nielsen and Schoch (1980) found that Tesch’s suggestion was too general and that error was less than 10% when the coefficient of variation (CV; standard deviation divided by mean) in lengths was less than 10% but could be substantially higher when the CV was higher, with the specific result dependent on the weight-length regression exponent (b). [Note that Nielsen and Schoch (1980) povide a nice geometric description of why this bias occurs.] Pienaar and Ricker (1968) and Beyer (1991) both suggested corrections to reduce the bias in the mean weight at age produced by the weight-length regression using the mean length.

I also set the random number seed to make the results reproducible.

Create A Sample of Data

I used the following code to create a very simple population that consisted of lengths, weights, and ages of fish. Lengths were modeled as normal distributions within each age-class. Weights were predicted directly from a known weight-length relationship without any error (in wt1) and with a small amount of error (in wt2). Modeling data in this way is simple, but at least somewhat realistic (Figure 1). 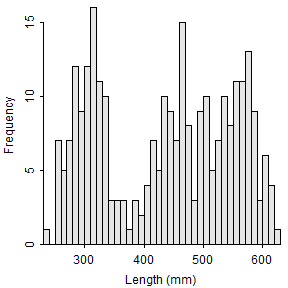 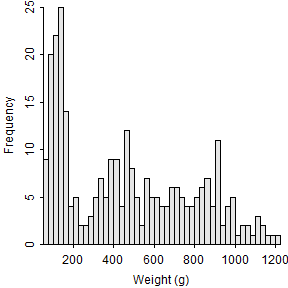 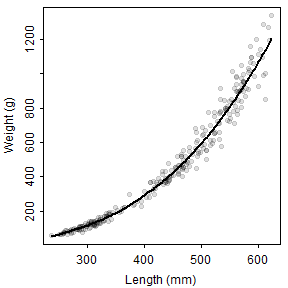 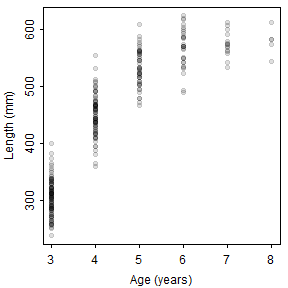 The first two lines below (using group_by() and summarize()) compute the mean length (mnlen) and true mean weight (i.e., the weight for individuals modeled above; true.mnwt) for the weights without any error for each age. The next line (using mutate()) computes the predicted mean weight at each age using the weight-length regression coefficients and the mean lengths just computed. The fourth line computes the percentage error between the predicted and true mean weights for each age.

Table 1: Summary table using weights without any error and no correction for the predicted mean weights.

Table 2: Summary table using weights with a small amount of error and no correction for the predicted mean weights.

I then performed the analysis above 1000 times, keeping track of the percent error between the predicted weight and the true mean weight for each age for each sample. The results of this simulation suggest an average negative bias near 4% for age-3 fish and between about 1 and 2% for all older fish (Table 3). Note that the CV in length for each age varied between 0.6% and 13.0% in these simulations.

Similar patterns were found using different values of the weight-length relationship exponent b (see Appendix). However, larger negative biases were observed as the standard deviation in lengths increased (see Appendix).

As noted above, Pienaar and Ricker (1968) and Beyer (1991) offered methods to reduce or eliminate the bias from using the weight-length regression to estimate mean weight at age from mean length at age. Beyer’s corrections were simple as they were based on the CV of lengths and the b coefficient from the weight-length regression. Beyer specifically offered three possible bias correcting factors for isometric growth and allometric growth assuming lognormal and normal distributions for lengths. Here I will only consider Beyer’s corrections for allometric growth with lognormal (i.e, Beyer’s equation 16) and normal (i.e., Beyer’s equation 18) distributions of lengths within age classes.

These calculations were again repeated 1000 tiems and summarized in the bottom two rows of Table 4. These results suggest that the mean bias in predicted weights at age when corrected with a correction factor appear to only be on the order of a quarter to a half a percent. These corrections seems to perform fairly consistently across a few different values of the weight-length regression exponent b and standard deviations in lengths (see Appendix).

Why Worry About This?

Why am I worried about this if the bias is on the order of 4% or less? First, for my application, we are estimating mean weight so that we can expand to total biomass. While a 4% error on an individual fish may seem inconsequential, that error can become quite important when expanded to represent total biomass, especially when it is a consistent negative bias.

So, why worry about correction factors when I can easily predict the weight for individual fish with the weight-length regression and then summarize these fish to get mean weight at age? In my situation, it appears that some of our mean lengths at age, and by extension mean weights at age, are poorly estimated because of small sample sizes at some ages. I am considering fitting a growth model (e.g., von Bertalanffy growth model) to the length-at-age data such that the fitted model can be used to predict mean lengths at age. The advantage of this is that information at other ages can be used to inform the calculation of mean length at an age. [The potential downside, of course, is that I would be prescribing a smooth curve to the growth trajectory.] If I can then estimate mean weights at age with minimal bias from the mean lengths at age from the growth model, then this could (I would need to test this) be beneficial in my situation.

Mean weights at age appear to be estimated with bias when a weight-length relationship is applied to mean lengths at age without any correction factor. The correction factors suggested by Beyer (1991) are easy to implement and seem to reduce the bias in predicted mean weights-at-age to near negligible levels. Thus, if mean weights at age cannot be predicted from individual fish, then it may be possible to get reasonable estimates from the weight-length relationship and mean lengths at age.

Appendix: Summaries Using Different Values of b and SDs

Table 5: Summary table with everything the same but b=2.5.

Table 6: Summary table with everything the same but b=3.0.

Table 7: Summary table with everything the same but b=3.5.

Table 8: Summary table with everything the same but SDs at 50.

Table 9: Summary table with everything the same but SDs at 70.