Please note that this is a guest post to fishR by Michael Lant, who at the time of this writing is a Senior at Northland College. Thanks, Michael, for the contribution to fishR.

My objective is to demonstrate how to create the age bias plots using ggplot2 rather than functions in FSA. Graphs produced in ggplot2 are more flexible than plots from plot() and plotAB() in the FSA package. Below I will show how to use ggplot2 to recreate many of the plots shown in the examples for plot() and plotAB() in FSA.

The code in this post requires functions from the FSA, ggplot2, and dplyr packages.

For simplicity I set theme_bw() as the default theme for all plots below. Of course, other themes, including those that you develop, could be used instead.

I will use the WhitefishLC data from FSA. This data.frame contains age readings made by two readers on scales, fin rays, and otoliths, along with consensus readings for each structure.

Additionally, I leverage the results returned by ageBias() from FSA. As described in the documentation, this function computes intermediate and summary statistics for the comparison of paired ages; e.g., between consensus scale and otolith ages below.

In addition, the $bias object of ab1 contains summary statistics of ages for the first structure given in the ageBias() formula by each age of the second structure given in that formula. For example, the first row below gives the number, minimum, maximum, mean, and standard error of the scales ages that were paired with an otolith age of 1. In addition, there is a t-test, adjusted p-value, and a significance statement for testing whether the mean scale age is different from the otolith age. Finally, confidence intervals (defaults to 95%) for the mean scale age at an otolith age of 1 is given, with a statement about whether a confidence interval could be calculated (see the documentation for ageBias() for the criterion used to decide if the confidence interval can be calculated).

The results in $bias.diff are similar to those for $bias except that the difference in age between the two structures is summarized for each otolith age.

Below is the default age-bias plot created by plotAB() in FSA. 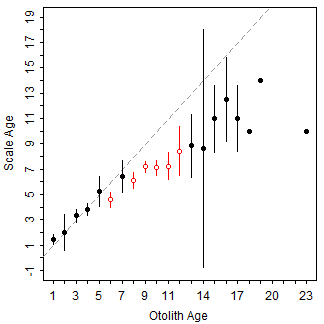 The ggplot2 code below largely recreates this plot. 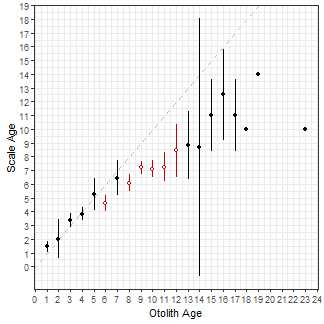 The specifics of the code above is described below.

The gridlines and the size of the fonts could be adjusted by modifying theme, which I did not do here for simplicity.

Below are more examples of how ggplot2 can be used to recreate graphs from plot() in FSA. For example, the following plot is very similar to that above, but uses the $bias.diff object in ab1 to plot mean differences between scale and otolith ages against otolith ages. The reference for the differences is a horizontal line at 0 so geom_abline() from above was replaced with geom_hline() here. 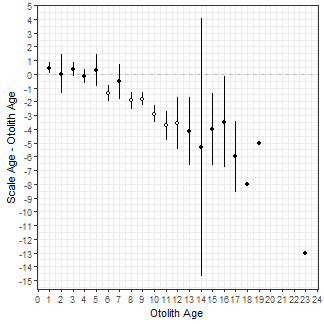 The graph below is similar to above but includes the raw data points from $data and colors the mean (and confidence intervals) for the differences based on the significance as in the first plot. Because data were drawn from different data frames (i.e., ab1$data and ab1$bias.diff) the data= and mapping= arguments had to be moved into the specific geom_s. Note that the raw data were made semi-transparent to emphasize the over-plotting of the discrete ages. 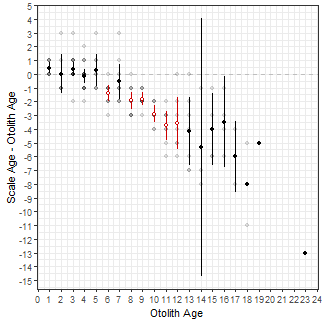 The graph below is the same as above except that a loess smoother has been added with geom_smooth() to emphasize the trend in the differences in ages. The smoother should be fit to the raw data so you must be sure to use ab1$data. I left the default blue color for the smoother and changed the width of the default line slightly by using size=.65. 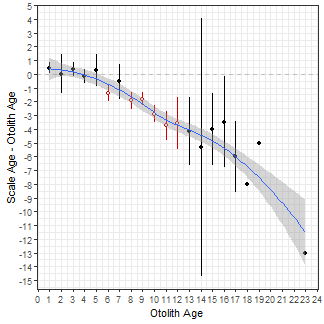 What Prompted This Exploration

Graphics made in ggplot2 are more flexible than the ones produced in FSA. For example, we recently had a user ask if it was possible to make an “age-bias plot” that used “error bars” based on the standard deviation rather than the standard error. While it is questionable whether this is what should be plotted it is nevertheless up to the user and their use case. Because this cannot be done using the plots in FSA we turned to ggplot to make such a graph.

A plot like the very first plot above but using two standard deviations for the error bars is then created by mapping ymin= and ymax= to LSD and USD, respectively, in geom_errorbar(). Note that I removed the color related to the significance test as those don’t pertain to the results when using the standard deviations to represent “error bars.” 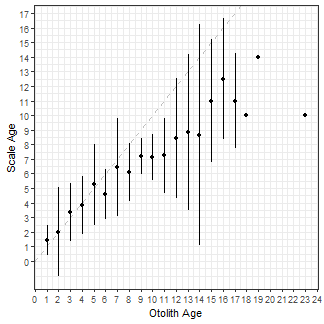 Finally, to demonstrate the flexibility of using ggplot with these type of data, I used a violin plot to show the distribution of scale ages for each otolith age while also highlighting the mean scale age for each otolith age. The violin plots are created with geom_violin() using the raw data stored in $data. The group= must be set to the x-axis variable (i.e., otolith age) so that a separate violin will be constructed for each age on the x-axis. I filled the violins with grey to make them stand out more. 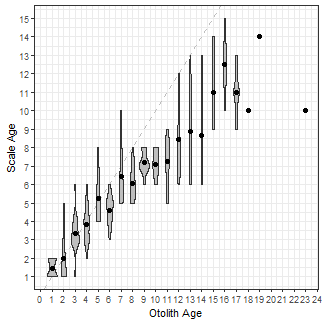