I am finally learning ggplot2 for elegant graphics. One of the first plots that I wanted to make was a length frequency histogram. As it turns out, there are a few “tricks” to make the histogram appear as I expect most fisheries folks would want it to appear – primarily, left-inclusive (i.e., 100 would be in the 100-110 bin and not the 90-100 bin). Below are length frequency histograms that I like.

The data I use are lengths of Lake Erie Walleye (Sander vitreus) captured during October-November, 2003-2014. These data are available in my FSAdata package and formed many of the examples in Chapter 12 of the Age and Growth of Fishes: Principles and Techniques book. My primary interest is in the tl (total length in mm), sex, and loc variables (see here for more details) and I will focus on 2014 (as an example).

Making the histogram begins by identifying the data.frame to use in data= and the tl variable to use for the x-axis as an aes()thetic in ggplot(). The histogram is then constructed with geom_hist(), which I customize as follows:

The scale_y_continuous() and scale_x_continuous() are primarily used to provide labels (i.e., names) for the y- and x-axes, respectively. By default, the bins of the histogram will “hover” slightly above the x-axis, which I find annoying. The expand= in scale_y_continuous() is used to expand the lower limit of the y-axis by a multiple of 0 (thus, not expand the lower-limit) and expand the upper limit of the y-axis by a multiple of 0.05 (thus, the upper-limit will by 5% higher than the tallest bin so that the top frame of the plot will not touch the tallest bin). Finally, theme_bw() gives a classic “black-and-white” feel to the plot (rather than the default plot with a gray background).

Note that the resultant plot was assigned to an object. Thus, the object name must be run to see the plot.

This base object/plot can also be modified by adding (using +) to it as demonstrated later.

Bins Stacked by Another Variable

It may be useful to see the distribution of categories of fish (e.g., sex) within the length frequency bins. To do this, move the fill= in geom_histogram() to an aes()thetic in geom_histogram() and set it equal to the variable that will identify the separation within each bin (e.g., sex). The bins will be stacked by this variable if position="stacked" in geom_histogram() (this is the default and would not need to be explicitly set below). The fill colors for each group can be set in a number of ways, but they are set manually below with scale_fill_manual(). 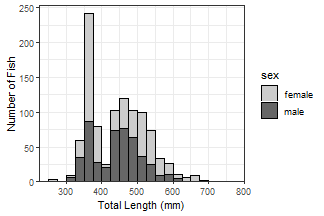 Stacked histograms are difficult to interpret in my opinion. In a future post, I will show how to use empirical density functions to examine distributions among categories. For the time being, see below.

Separated by Other Variable(s)

A strength of ggplot2 is that it can easily make the same plot for several different levels of another variable; e.g., separate length frequency histograms by sex. The plot can be separated into different “facets” with facet_wrap()m which takes the variable to separate by within vars() as the first argument. 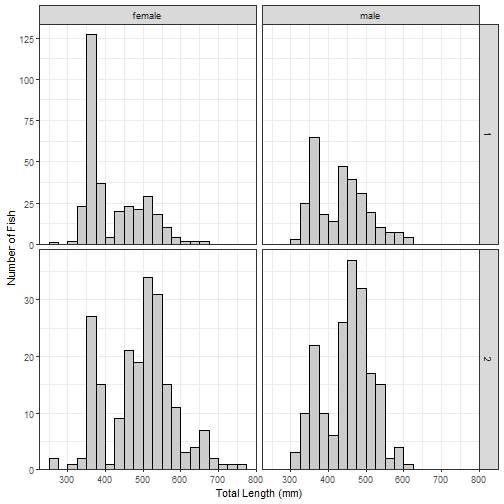 This post is likely not news to those of you that are familiar with ggplot2. However, I am going to try to post some examples here as I learn ggplot2 in hopes that it will help others. This is the first of what I hope will be more frequent posts.

Other related (non-ggplot2) posts are