Last week I posted about a modified age bias plot. In this post I began looking more deeply at an alternative plot called the Bland-Altman plot. Below, I describe this plot, demonstrate how to construct it in R, give a mild critique of its use for compare fish age estimates, and develop an alternative that is mean to correct what I see as some of the shortcomings of using the Bland-Altman plot for comparing age estimates. This is large a “thinking out loud” exercise so I am open to any suggestions that you may have. 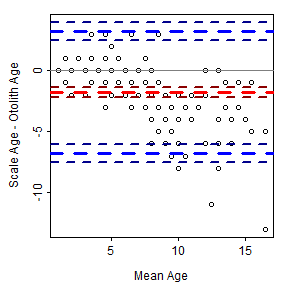 As a general rule, a 95% confidence interval for the mean difference that does not contain zero suggests a difference (or a bias) between the two age estimates. For example, a bias is evident in Figure 1. In addition, one would expect 95% of the points to fall within the “agreement limits.” Points that fall outside this range may be considered further as possible outliers. Log differences have been used if the differences are not normally distributed and the percentage difference (where the difference is divided by the mean age) have also been used (Giavarina 2015).

The Bland-Altman plot in Figure 1 was created with bland.altman.plot() from the BlandAltmanLeh package (Lehnert 2015b). Other R functions exist for creating Bland-Altman plots (or the equivalent “Tukey’s Mean Difference Plot”). However, this is a simple plot that can be easily constructed from “scratch” as shown next. I then provide a mild critique of the Bland-Altman plot for use in age comparisons and offer an alternative (that is not an age bias plot).

In this example, a Bland-Altman plot is created to compare consensus (between two readers) scale (scaleC) and otolith (otolithC) age estimates for Lake Champlain Lake Whitefish.

The mean and differences between the two age estimates are easily computed and added to the original data.frame. One way (of many ways) to do that is with mutate() from dplyr (as shown below).

A scatterplot is constructed with plot() with a formula of the form y~x. In this case, the points are white (col="white") so that the points will not be evident.

In this way, items can be added “behind” the points. For example, abline() is used with h=0 to add a horizontal reference line at zero.

In addition, horizontal lines at the mean and approximate lower and upper 95% confidence limits for the differences may be added.

Agreement lines (without confidence limits) may also be added. [These could, of course, be eliminated to address the second issue below.]

The data points are then added to this base plot with points(). “Solid dots” (pch=19) that are a transparent black such that when five points are overplotted the “point” will appear solid black (col2rgbt("black",1/5)) are used to address the first issue below. 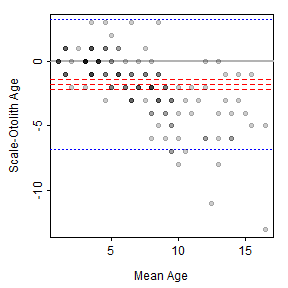 My Critique of the Bland-Altman Plot for Age Comparisons

I like that Bland-Altman plots (relative to age bias plots) do not require that one of the variables be designated as the “reference” group. This may be more useful when comparing age estimates where one set of estimates is not clearly a priori considered to be more accurate (e.g., comparing readers with similar levels of experience).

However, I don’t like the following characteristics of (default) Bland-Altman plots.

A GAM may be fit in R with gam() from the mgcv package (Wood 2006). A thin-plate regression spline (Wood 2003) is used as the smoother by default when s() is used on the right-hand-side of the formula in gam(). The degree of smoothing is controlled by k= in s(). I have found (with minimal experience) that k=5 may be adequate for most age comparison situations (note that smaller values provide more smoothing, larger values provide less smoothing).

Summary of the model fit is seen by submitting the gam object to summary(). In this example, the approximate p-value for the smoother term suggests that there is a relationship between the differences and means.

The smoother “line” with 95% confidence limits is added to the plot by first using the smoother to predict the differences in ages (along with the SE of those predictions) across the entire range of mean ages. Approximate confidence limits are then derived (using normal theory) from the predicted values and their SEs.

The smoother “line” is then added to the plot with lines().

Alternatively, the 95% intervals for the smoother line may be added as a shaded region with polygon(). Note that rev() reverses the order of the elements in a vector and is a “trick” used to properly construct the boundaries of the polygon for plotting. 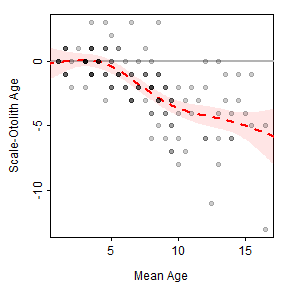 A similar plot is shown for the comparison of otolith age estimates between two readers in Figure 4. Also note (see below) that the smoother term is not significant for the between-reader comparison of otolith age estimates, which suggests no relationship between the differences in ages and the mean age. In addition, the intercept term is not significantly different from zero, which indicates that there is not a constant bias between the two readers. 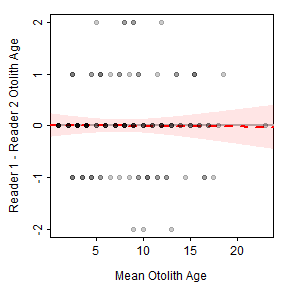 Adding the GAM to the Age Bias Plot

In situations where one of the age estimates could be considered a priori to be more accurate, it seems to make more sense to put that age estimate on the x-axis rather than the mean between it and the less accurate estimate. In other words, return to the concept, though not the exact structure, of the age bias plot. The GAM smoother can also be added to this plot (Figures 5 and 6). 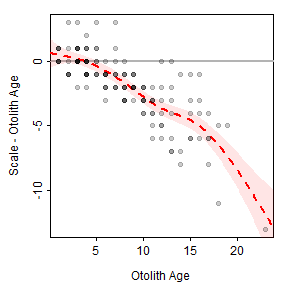 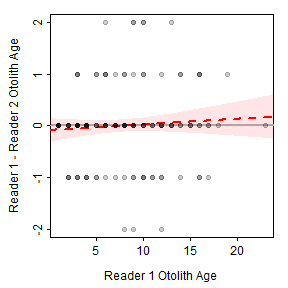 If this all seems plausible then consider: