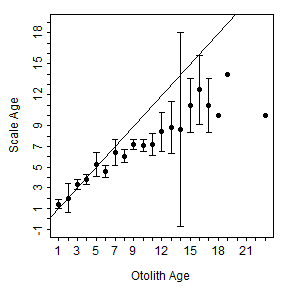 I found the age bias plot to be useful for detecting systematic differences in estimated ages between two sets of readings, but I also found the plot to be “clunky” with some data sets. Thus, I modified the original design in several ways. The first set of changes were simply to make the plot “cleaner” and easier to interpret. Specific changes I made are described below.

These modifications are the defaults settings in ageBias() and plot(). 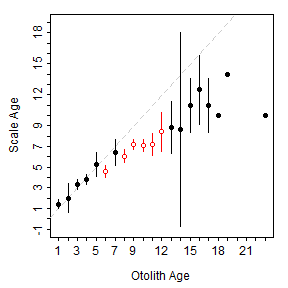 Plotting Differences on the Y-Axis 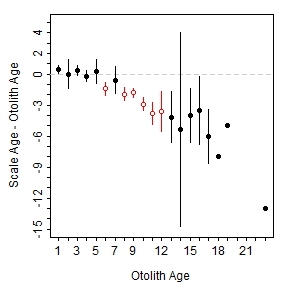 I often wanted to have a feel for the individual variabilty underlying the age bias plot. A faint gray line “behind” that stretches from the minimum to the maximum nonreference age for each reference age is plotted behind each confidence interval by including show.range=TRUE. 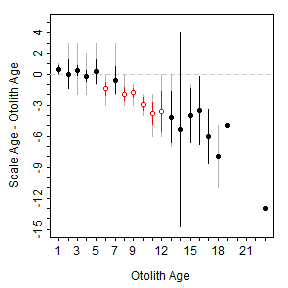 Alternatively, individual points (for paired age estimates) are included with show.pts=TRUE. There tends to be considerable overplotting of individual points because of the discrete nature of age data. To make individual points more obvious, a transparent color can be used for each point such that more overlapping points will appear darker. The level of transparency is controlled by including an integer in transparency=, with values further from 1 being more transparent. 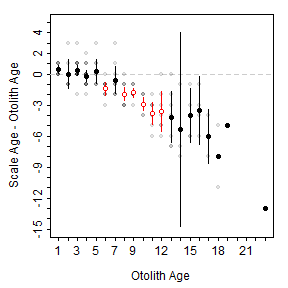 I also often want to know the sample sizes underlying the age bias plot. In particular, it is useful to know the number of nonreference age estimates that contributed to each mean and confidence interval. My first attempt at providing this information on the plot was to simply print the values on the plot (usually above the plot or just above the x-axis). The sample sizee can be added to the plot with show.n=TRUE. 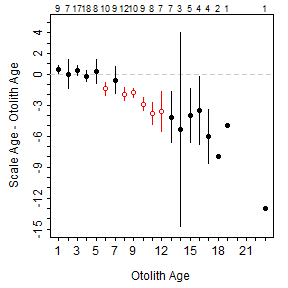 These values, however, are often either so crowded or so small as to be of little utility. Recently I added the ability to add marginal histograms to the age bias plot. For example, a histogram of the sample sizes in the previous plot can be added by using xHist=TRUE. 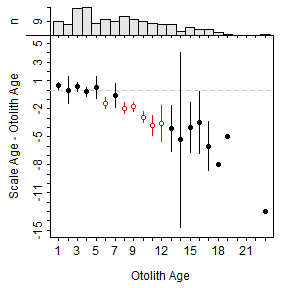 The same can be added for the nonreference ages with yHist=TRUE. This plot has the added advantage of showing the distribution of differences in age estimates, with the bar at a difference of zero representing the amount of perfect agreement between the sets of age estimates. 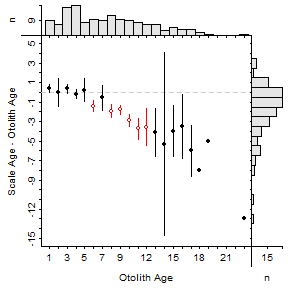 The same plot, but with a marginal histogram of the nonreference age estimates rather than the difference in age estimates is also nice for showing the age distributions for both sets of age estimates. 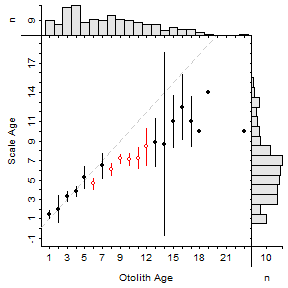 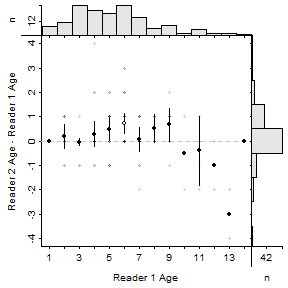 A Couple of Details

The modifications of the age bias plot described here are available in the development version of the FSA package, but not yet in the stable CRAN version. They will appear in v0.8.13.

Several of the options illustrated above can be modified with other arguments to ageBias(). See the documentation for further details (i.e., use ?ageBias).

The plots in this post used the following modifications of the default base graphing parameters. These changes make narrower margins around the plot, move the axis labels closer to the axes, and reduce the size of the axis tick marks relative to the default values.

Please let me know what you think about my preferred age bias plot. In general, I like it and feel that it is more informative than other age bias plots. However, I am not quite satisfied with how I separated the “axes” labels for the main age bias plot and the marginal histograms. It looks “hacky” to me.

In addition, I thought about putting a horizontal line on the top marginal histogram that shows the cutoff for when a confidence interval is calculated. I also thought about highlighting the “zero bar” in the right marginal histogram when difference=TRUE to further highlight the amount of agreement between the age estimates. In the end, I did not make these modifications because they would seem to add clutter or draw too much attention.

Let me know if you have other ideas for how these age bias plots could be modified to be more informative.

One Twitter follower said: “I think open and closed symbols say all that is needed about 95% confidence limits. Just show mean, range, and 1:1 line.” It took some modifications to do this, but there is now a show.CI= argument that will turn off the confidence intervals when set to FALSE. In addition, the user can now control the color and line width of the range bars with col.range= and lwd.range=. I decided not to color code the mean symbol or range bar for significance because I felt that that would be misleading (i.e., the user would view the “interval” as a confidence interval rather than a range interval). However, the mean symbol still represents a significant difference. Below is one example of this type of plot (don’t forget to ask for the range bars with show.range=TRUE). This might become my preference. 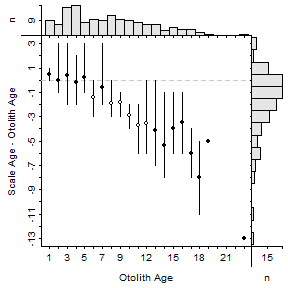 Another Twitter follower said: “Add border to outside of plot? Fill histogram bars or outline with same color as mean and CI intervals?” I tried the second request but did not like the look. Even that simple change in color or outlining seemed to clutter the plot, especially as it only reinforced the ages where a difference was detected. The first request can be accomplished by using box() following construction of the age bias plot. Just make sure to include which="figure". 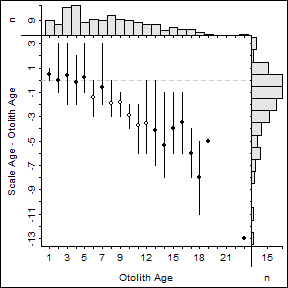